As soon as I heard that I had won the new Winsor and Newton Limited Edition Desert Collection I excitedly told all my facebook followers that I had won the new Dessert Collection. I was way too excited to check my spelling (not my best subject, anyone who is a naturally good speller has my admiration). A dear friend pointed out my boo-boo and I cheerfully rechristened them my pudding paints, with which I shall paint puddings. 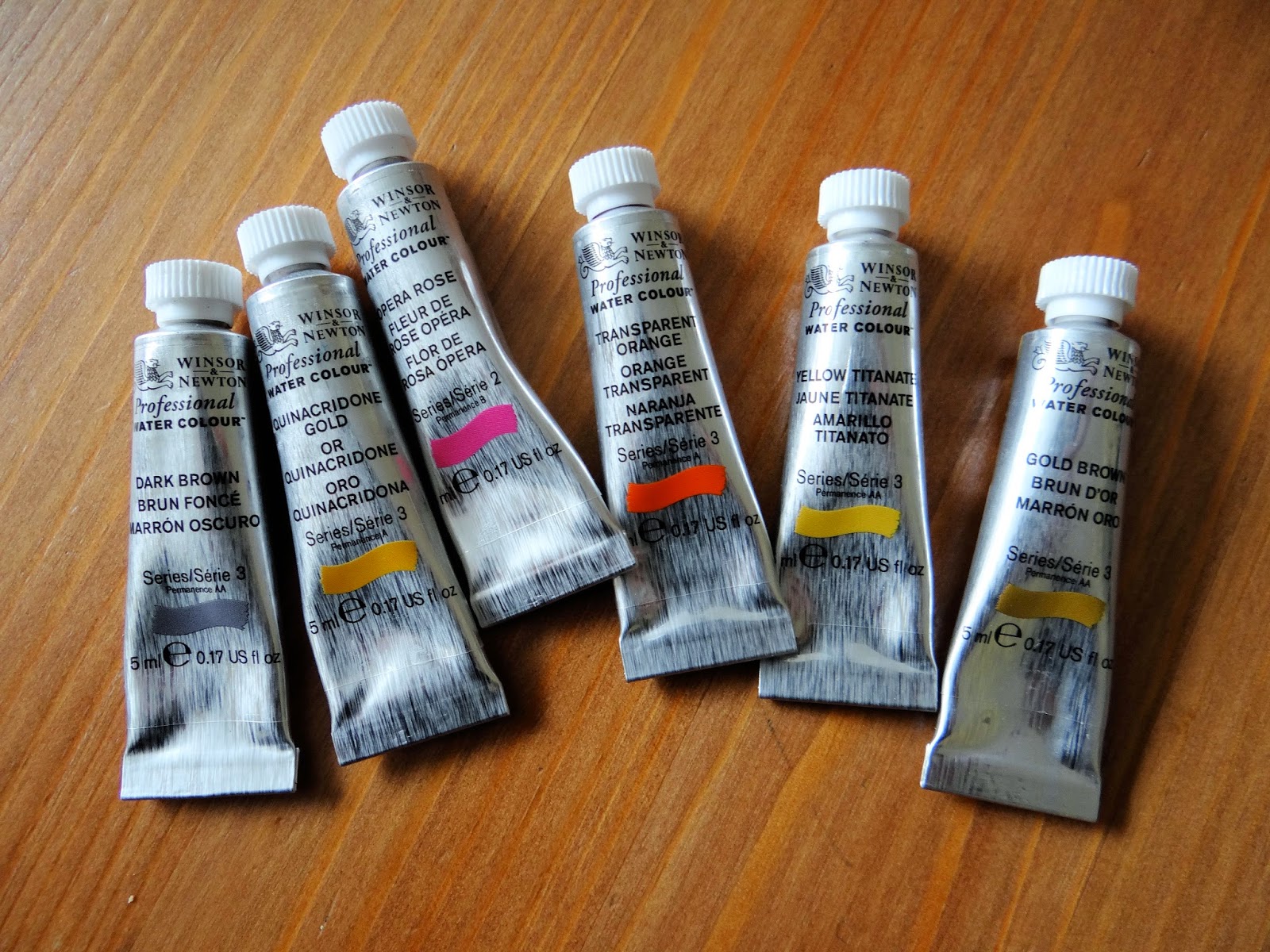 Space is a premium in my house so I needed to find a simple way to store my new tube paints alongside my existing half pan ones. Simple! I found some empty half pans in my local art shop, and my new paints now sit down the middle of my lightweight sketching box. It took a few days for them to set and become portable (and pack-away-able), and it was a bit of a squeeze, but they're in now and ready to go
. 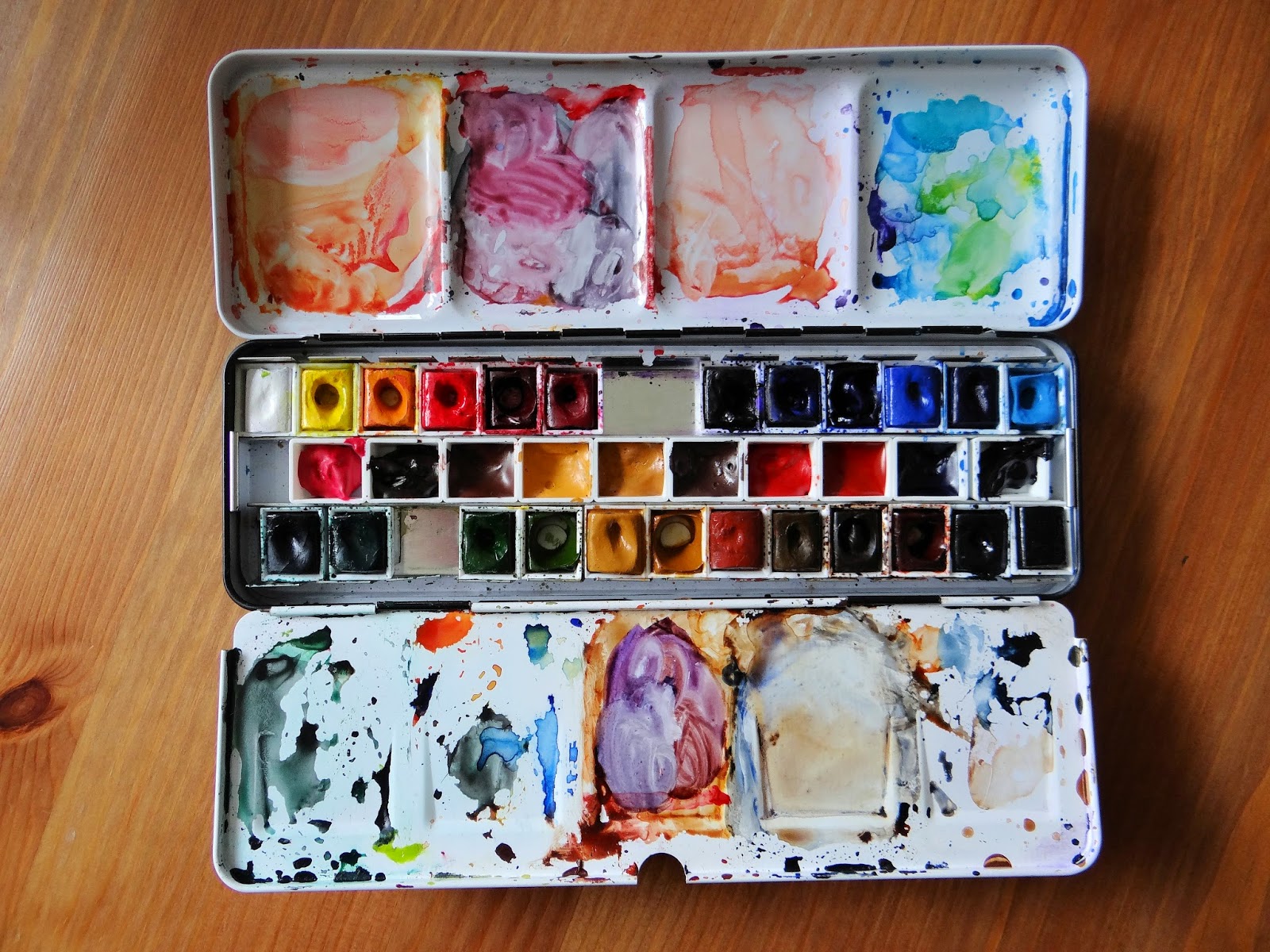 So far, so good - but these paints are unfamiliar to me. How do I tell which is which?

This bit was easy. I stuck a little label onto each half pan before I filled them up so that if they fall out, I can easily identify them. This is important because the yellows in particular are very similar to yellow ochre and raw sienna that I already have in my paint box.

And then I made a little label for each paint along with a sample, and stuck them together with selotape. I had already made an ID chart for the existing paints in my box using the paint wrappers, so I cut it down the middle and stuck my new home made labels in place. 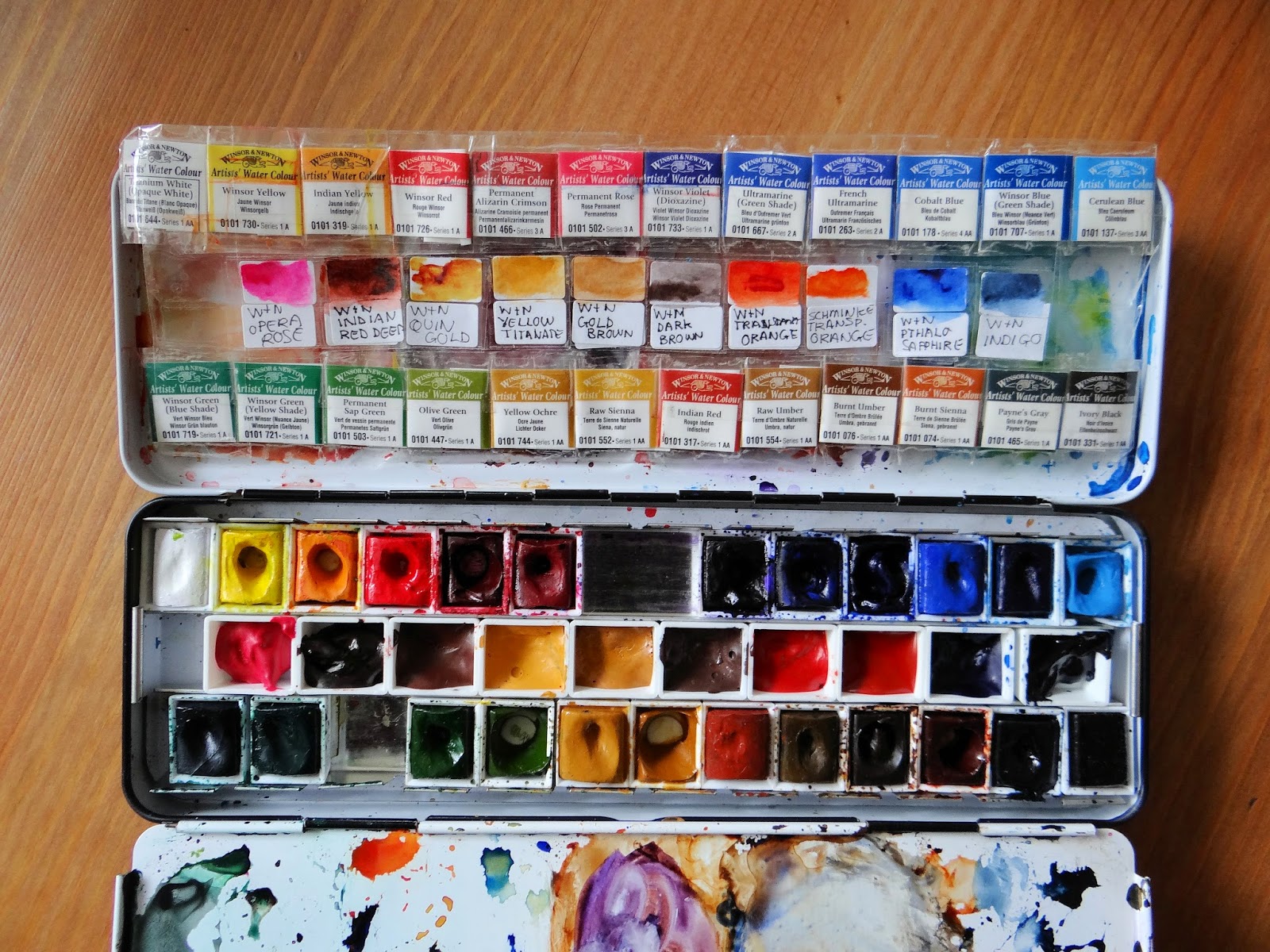 The very first thing I painted with my new pudding paints was naturally, a pudding...

For my first pudding, a jammy biscuity slice, I used the two opaque yellows Gold Brown and Yellow Titanate, with a touch of the opaque Dark Brown. I'm not a big fan of mixing in the palette so these were applied wet in wet. The jam (Indian Red Deep and a touch of Pthalo Sapphire in places) was added when the cake was dry. I found the top quite tricky - the plan was to underpaint with Indian Red Deep and when that was dry add in Dark Brown to the whole top. Dark Brown is a VERY opaque paint and I was quite distressed to begin with as it all seemed to be going wrong - too thick, too much! However, it is extremely liftable, and whilst is it a staining colour, the underpainted red still came through. I'm quite pleased with this one. 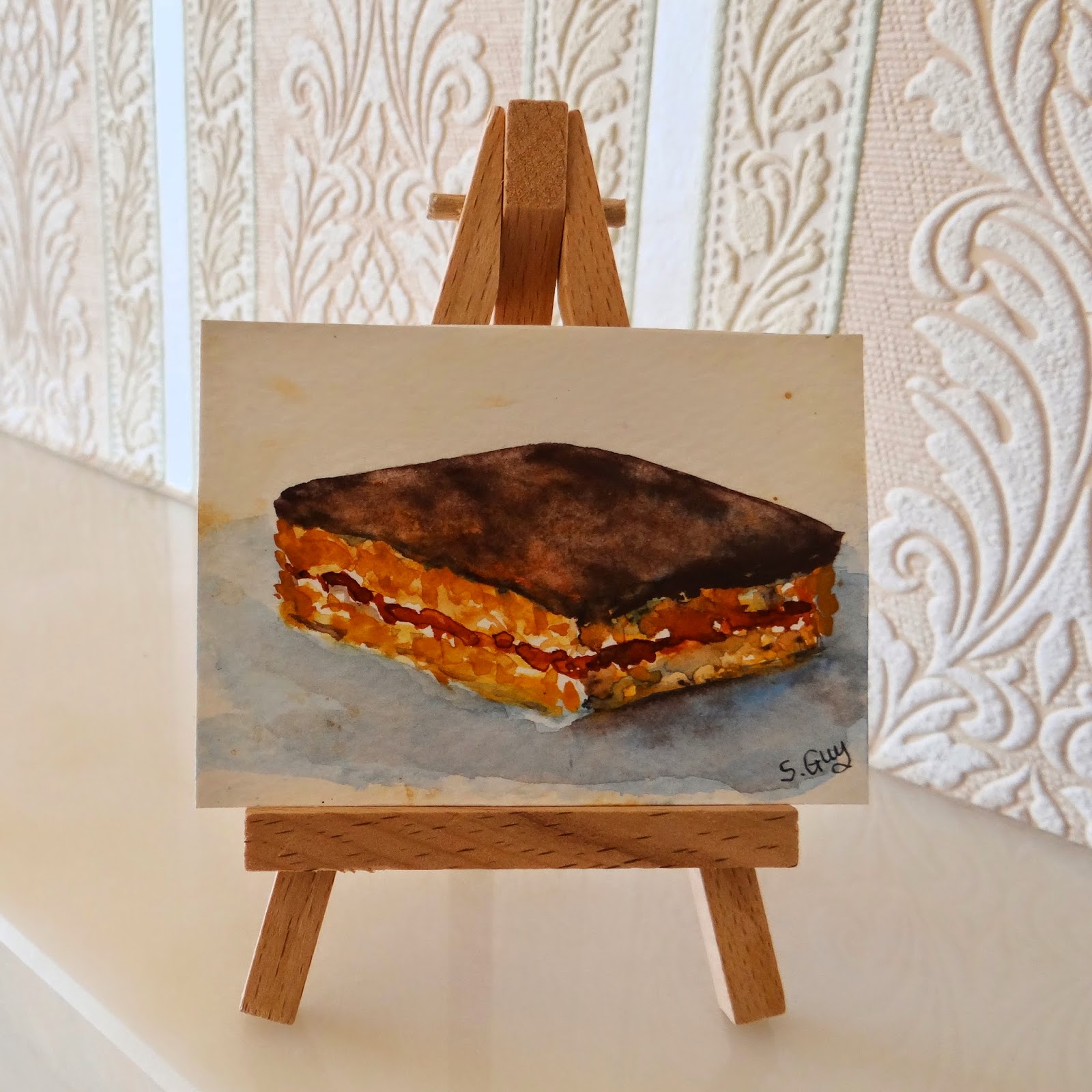 Next, a red berry crumble. The first mistake I made with this pudding was in the initial (very sketchy) drawing. I really should have given it some perspective - a side on view is not the easiest to portray. Anyway, "I've started so I'll finish".  The berries were painted with Indian Red Deep and Transparent Orange - an absolutely lush combination. Both are transparent and very juicy. With the addition of some Pthalo Sapphire (also transparent) I achieved a delicious red berry bottom to my crumble. The topping used all three opaques - Gold Brown, Dark Brown
and Yellow Titanate. 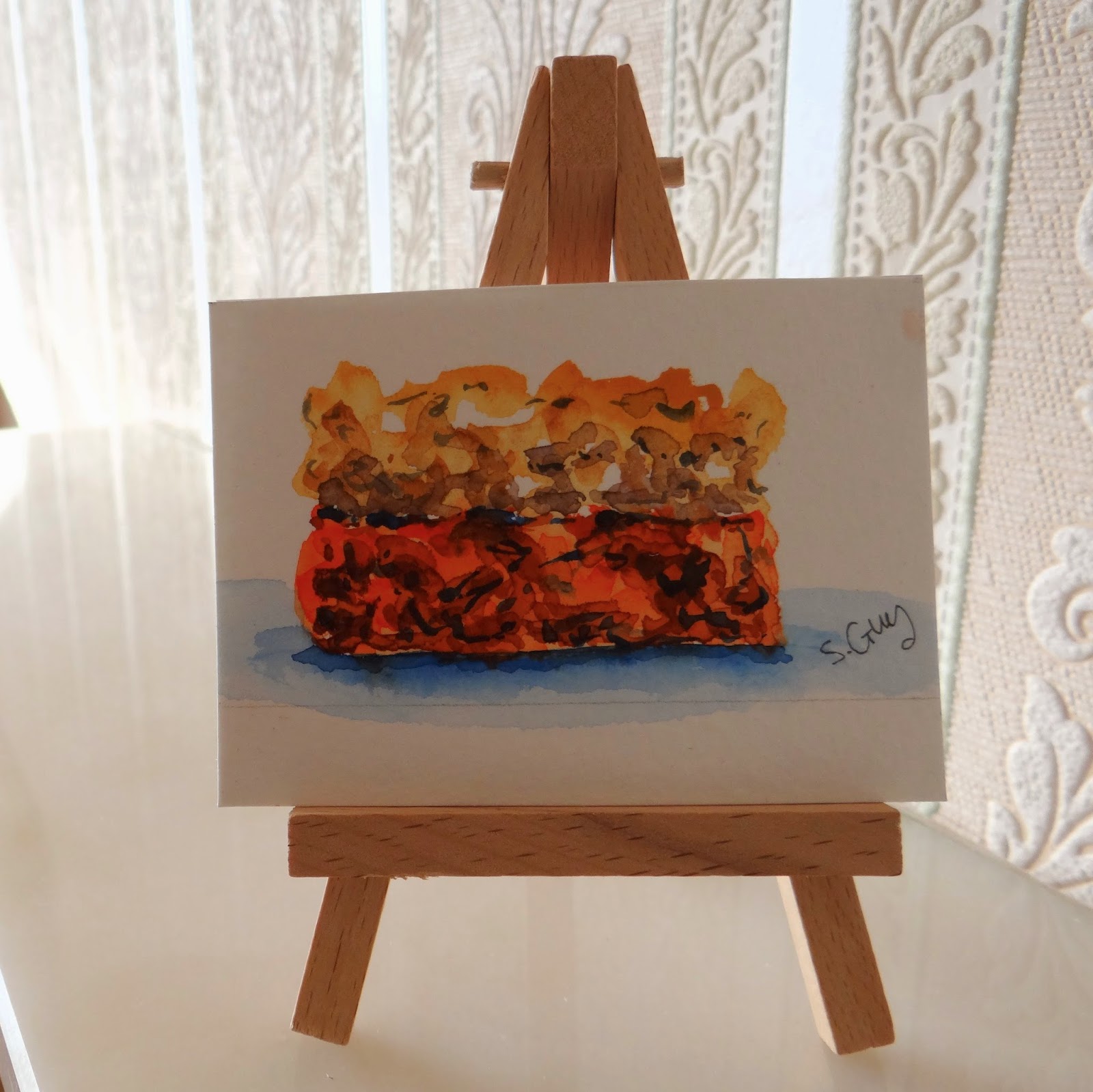 Whilst I was painting the first crumble I was not happy with the yellows. I think W&N made a mistake by making all of the yellows opaque - I would much prefer to have had one opaque and one transparent. So I wondered what would happen if I repainted the crumble using raw sienna and burnt umber instead, as these are both transparent. Surprisingly, I prefer the one above that used the Yellow Titanate and Gold Brown. 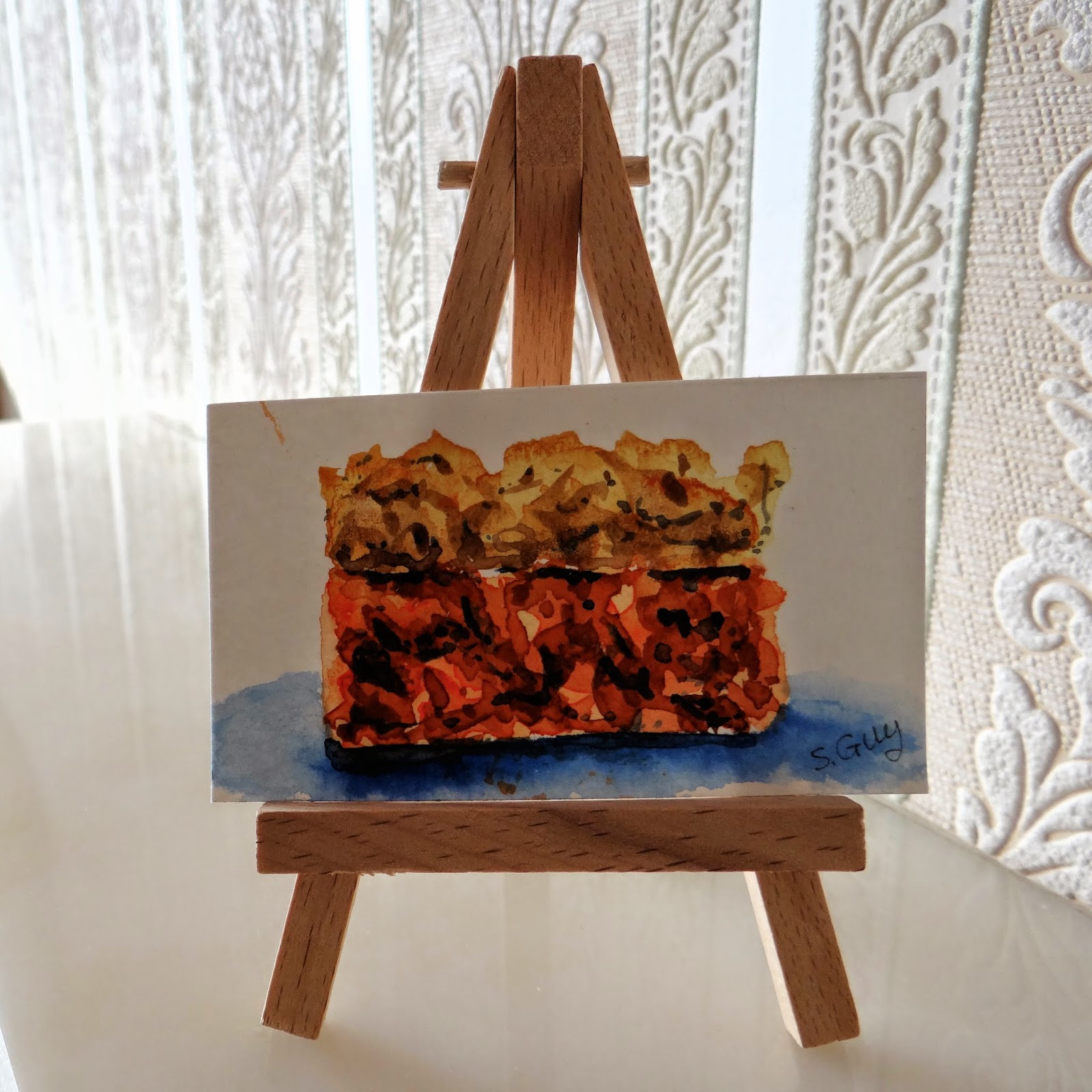 For my third pudding, I thought I'd do a steamed red berry pud. Colour combinations were the same as the other puddings. This one makes me laugh - the Transparent Orange glows so much that it looks like the inside of a volcano! 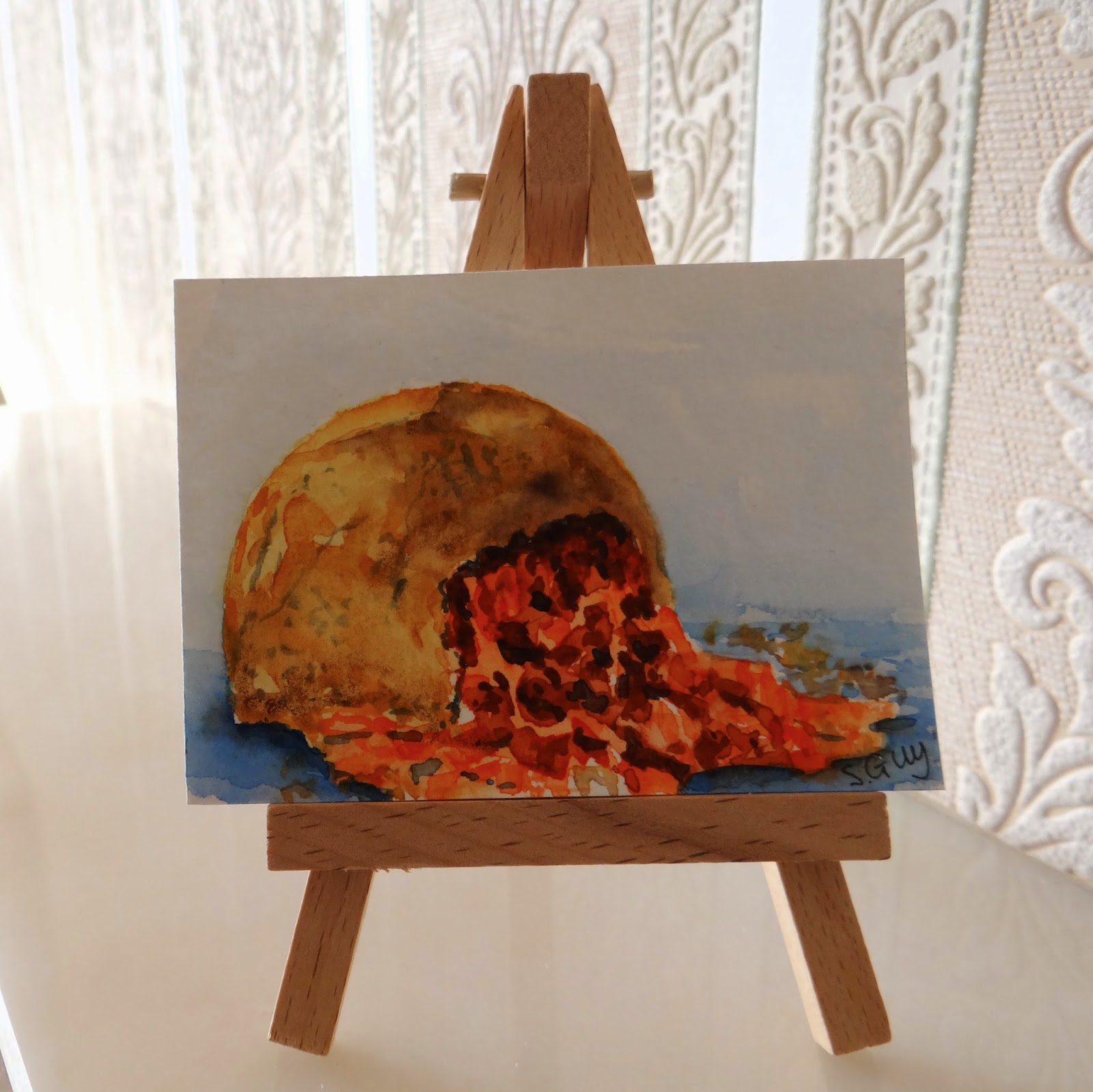 Finally, I couldn't think of a blue pudding, so instead I painted a gorgeous little Goldfinch. The only addition to the pudding paints here was a little Winsor Yellow along the Goldfinch's back. This painting really shows off the beautiful Pthalo Sapphire. 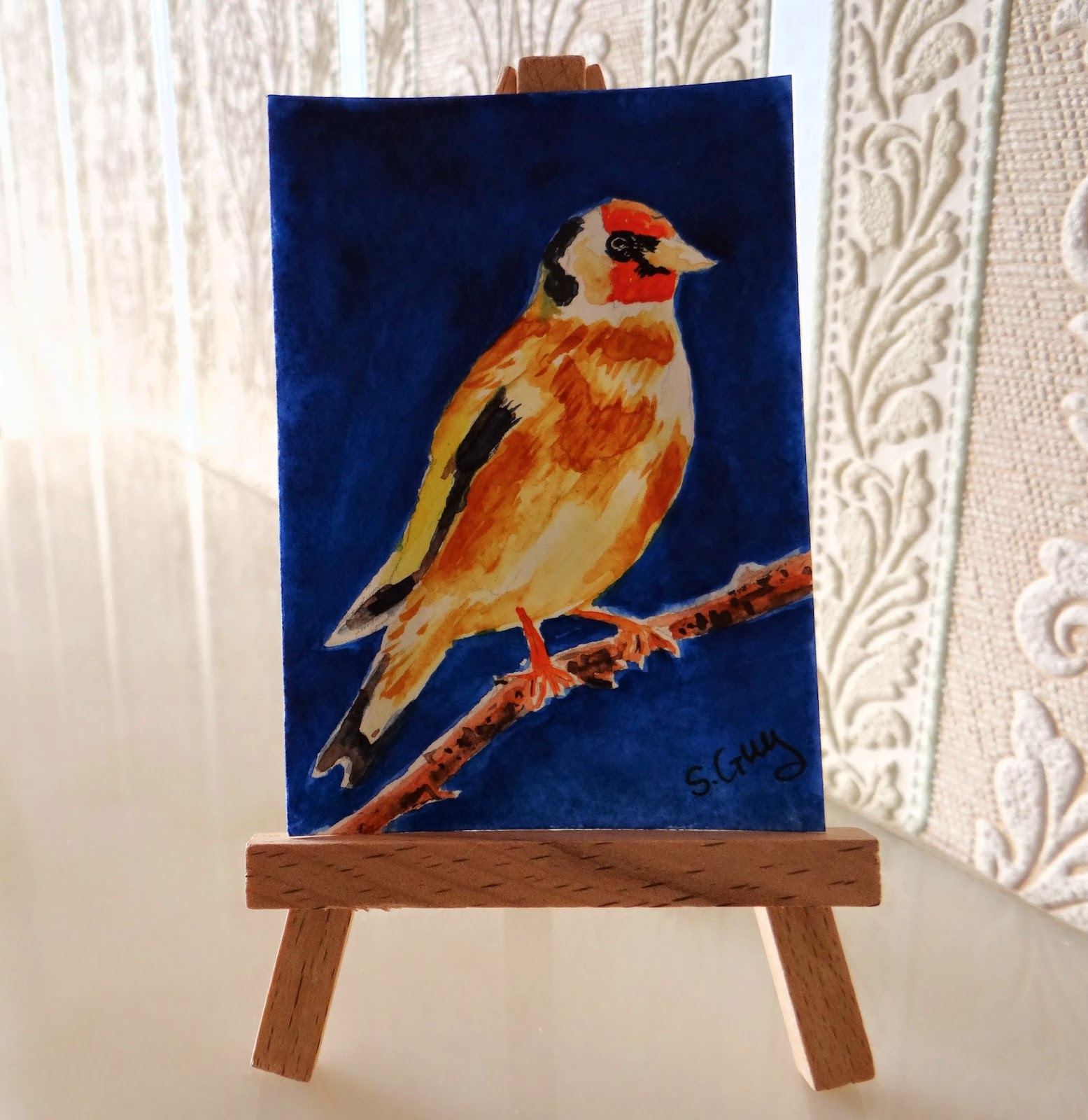 If you're thinking of buying these paints but are on a limited budget I'd say go for Transparent Orange, Indian Red Deep and Pthalo Sapphire first, in that order.

Next I would buy the Dark Brown, it's a warmer shade than you can achieve by mixing Burnt Umber and French Ultra Marine.

Finally, the yellows are very similar to Raw Sienna and Yellow Ochre, but there are subtle differences that will come in useful. If money is no object, buy them all before they sell out!

Have you used these paints? What do you think of them?

Thanks so much for dropping by, I do hope you enjoy reading my blog. Come on in, leave a comment and join the chat!