I thought I'd share with you the process of creating a miniature oil painting.

So far all of my miniature oil paintings have conformed to the standard ACEO measurements. So to begin with I must explain what an ACEO is...

What is an ACEO?

ACEO stands for Art Card Editions and Originals. They can be created using any medium at all - the only stipulation is that they measure 2.5 inches by 3.5 inches. ACEOs are highly collectible and can be displayed on a mini-easel 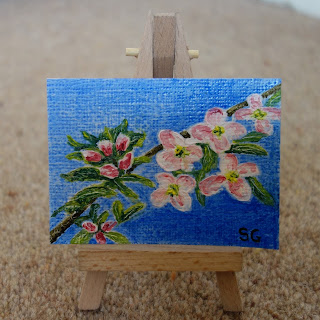 or in a small photo frame. Many collectors display their collections in a photograph album on the coffee table, where they can be admired by visitors and readily enjoyed by the owner every day.

How I create my ACEOs using oil paints

To begin with I cut out some canvas paper to the required size of 2.5 inches x 3.5 inches.

Next I tape my paper to a board. I use the back of an old watercolour pad as it is nice and light for lifting and moving around as I work, and tape on the back using a rolled piece of masking tape. Sometimes I tape round the edges instead, which will leave a white border that can look nice.

Then starting at the top left (because I am right handed), I begin to paint.

I invariably begin with a base layer. For this one I wiped blue oil paint diluted with Liquin across the paper with a rag and then lifted my flower petals using Zest-It Solvent.

Liquin is a medium for mixing with your oil paints. Add a small amount to give the paint a nice buttery consistency, and add more to give a more liquid paint. For the base layer I add more liquin. An added benefit of Liquin is that it speeds up the drying process.

Zest-It I really like the this range of solvents because it does not contain the nasties that are in turps. I only use turps if I am painting outside, and if I am using turps then I wear latex gloves. 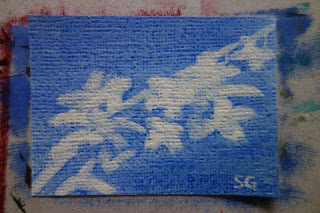 After a couple of day's drying I then add the details.

I don't paint dark to light as most oil painting tutorials would have you do. I find that working light to dark means that you can maintain the freshness of the highlights much more easily and can get more done in one session.

Unfortunately for you I got so carried away with this stage that I forgot to take step by step photos - this is the only stage I photographed. 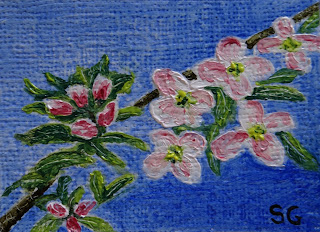 I use photos a lot to assess my work. I can see from the photo above that I have missed some of the branch under the buds.

Here is the finished painting. 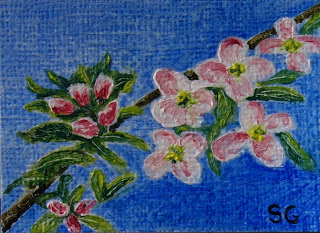 Now we play the waiting game. I would normally leave it on the board for a week or two but I wanted to show you it on the mini-easel so I carefully took it off the board holding only the edges, and now it is sitting on a mini-easel where I can enjoy watching paint dry. It will need to stay on the easel for a couple of months.

And finally, after 6 months, I can varnish it!

It is possible to test for dryness before the 6 months is up by rubbing a section of the painting with turps on a tissue, but to be honest I don't want to risk damaging it, so will just leave it be.

Watercolour Portrait of my Teenagers - Step by Step

For Christmas just gone I promised my in-laws a portrait of my teenage children. What with one thing and another time is passing so quickly - if they're going to get it before next Christmas I need to get cracking!

The hardest part of the whole process was getting a half decent photo of the two of them together! Several hundred photos later (literally) I chose this one. Eyes open, both smiling and shows their happy playful relationship. 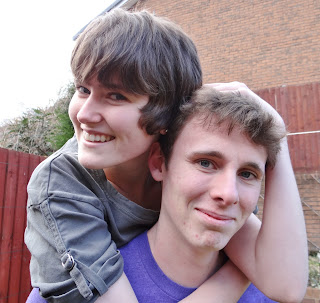 To begin with I sketched out an outline with very faint pencil. Sometimes I paint without an initial drawing but when it needs to look just like the photo I do need to draw first.

When working in watercolour it's important to use a VERY light touch with the pencil so you may not be able to see my lines very clearly on the first picture below. Hopefully the close up in the second picture will show you more detail. 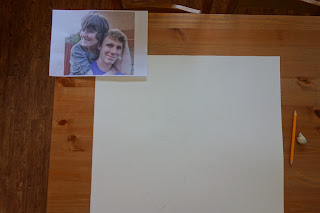 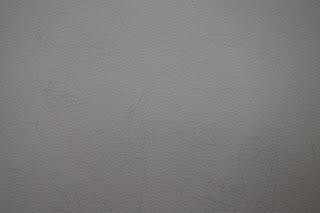 The thing that makes a portrait really come to life is the eyes, and the most important thing about the eyes is to retain highlights. The highlights in the original photo are very difficult to make out, but with a lot of squinting and a little imagination I masked two dots in each eye. I also masked out the metal buckle on Kate's shirt sleeve. Again I apologise if you can't make anything out in this photo! 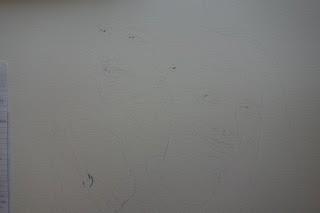 To paint this portrait I have used Winsor & Newton artists watercolours throughout.

I began by mixing a very watery permanent rose and raw seinna and painted an initial wash over all the  skin areas, using my brush to blend paint away to nothing above the hairline, and a tissue to lift out highlights on the cheeks, nose, neck etc.

Tip: if you print out a monochrome version of your photograph you will be able to see the highlights much more clearly. 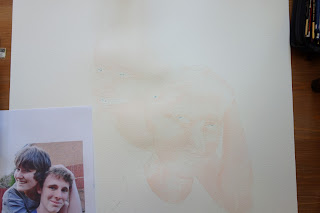 I then strengthened this wash with a stronger mix of the same colours. 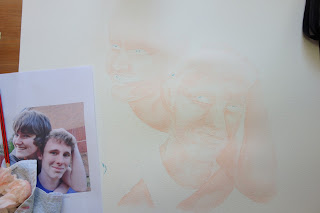 Several washes later I have a strength I can work with. 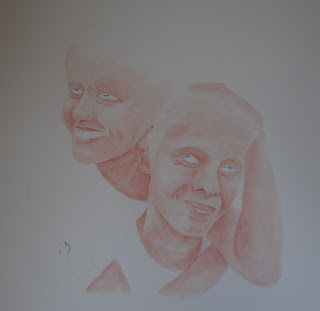 Six hours in total spent so far, and time to put the paints away for the day.

Many people start with the eyes, however I like to think a lot about them before I begin. During the skin wash process I realised that I had the eye highlights completely wrong, so I removed the original mask and applied some more in the correct position. Good job I didn't rush in with the eyes at the start!

I needed to ponder those eyes some more, so I chose a different area to work on next and began on the purple Tshirt, using violet and cobalt mixed on the paper (not in the palette). 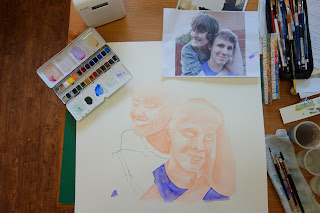 Next I added the green T shirt using olive green and ultramarine. This time I mixed in the palette. I love painting fabric - it's all about carefully observing where the shadows create hard and soft edges.

At this point I also felt happy enough with the eyes to add them in, painting out from the pupils and in from the outer edge of the iris. I started with raw sienna, then individually added olive green, cerulean blue and French ultramarine. The masking fluid is still in place. I have added a little definition to the eyelash line using a weak mix of burnt umber and ultramarine.

Finally in this step I added shadow to the purple T shirt using violet and cobalt mixed in the palette. 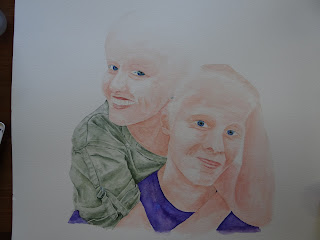 I began by choosing raw sienna, raw umber and burnt umber for Andy's hair, however when I had applied the first wash I was not happy with it - far too vibrant and unrealistic. 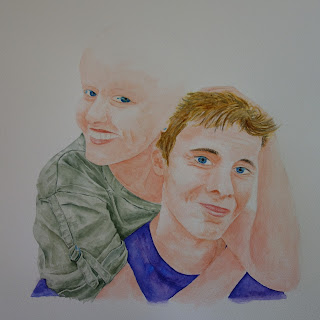 Andy has mousy brown hair, not straw yellow, so I lifted this layer off with a large filbert brush. 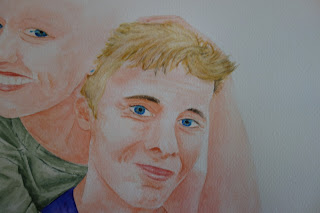 Much better as a base colour.

Whilst this was drying, I added a raw sienna wash as an underpainting for Kate's hair. 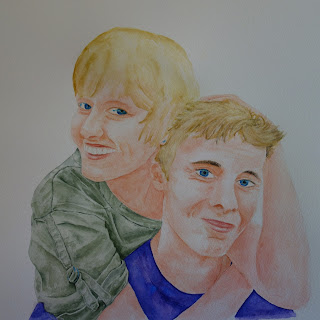 When this was dry I mixed burnt umber with ultramarine in two shades in my palette, and applied to Kate's hair. Then using a large filbert brush I lifted hightlights and blended where necessary. 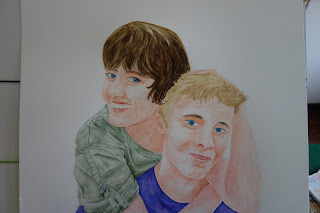 Moving on to Andy's hair, I mixed a paler colour of raw umber, burnt umber and ultramarine. Using the same technique I gave Andy some hair. Then I added some individual hairs using a small round brush. 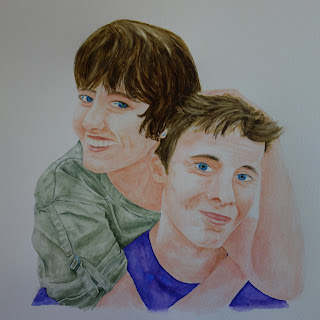 At some point during this session (before adding the hair) I gave both Andy and Kate eyebrows, and added shadow under the eye lids.

I also built up the shading and sculpting on the both faces, skin tones and around the teeth. It's important to keep a very light touch with the teeth, painting around them but not outlining them.


When the hair is thoroughly dry I will put some shading under the hair to make it rest properly on the faces.

Meanwhile, I removed the masking fluid from the eyes and softened the highlights left behind. I also redid the lashlines.

Another 3 hours have passed (total 12.5 hours so far) and it's time for another break.

I asked Andy and Kate what they thought so far. They both liked it but Andy said "I'm not that shiny" and Kate thought her hair was too red. Useful feedback.

To correct the hair I glazed her hair with a mix of raw umber, burnt umber and ultramarine blue.

I left the highlights on Andy's face to the end, as I wanted to balance the background wash and the highlights. It is easy to add more paint, but very difficult (if not impossible) to lift back to white paper once the paint has dried.

I also added some shadows cast by the hair. This helps to place the hair on the head. 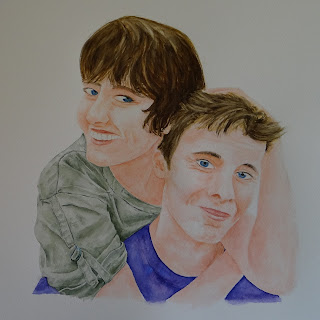 Now for the background. I chose to use cerulean blue to compliment the eye colour. I dampened the background, leaving some places dry for interest. Then I covered the whole in a pale wash of cerulean blue - it's easy to add more later, and I feel it's better to add multiple washes rather than overpower the painting in one go.

I turned the painting several times during this process. Here you can see my easel with the painting pegged to a ribbon with mini craft pegs. You can also get an idea of the scale of the painting too! 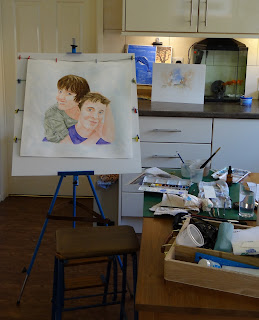 Several hours later, once this had thoroughly dried, another coat of blue went on, concentrating on a deeper strength of colour in the top right hand corner. 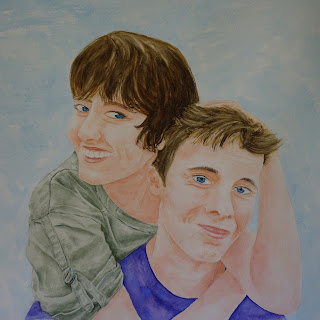 I toned down the highlight on Andy's left cheek.  Then I removed the masking fluid on the buckle and added some shadow using French Ultramarine.

After 16 hours I think it is finished! 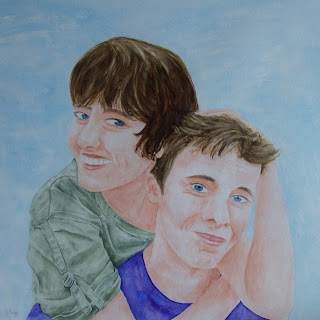 
Off to the local framing shop. I chose a simple pale gold frame with a double mount (matt) of cream with pale gold showing on the undermount. 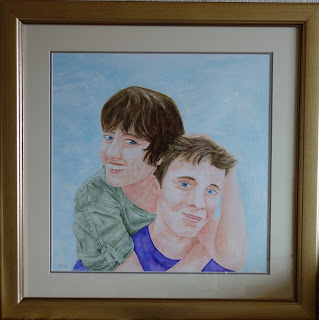 I'm really pleased with the result!

If you would to commission a portrait, please email info@FlowaPowaArt.com